Children receiving a shoebox filled to the brim with gifts and the smile on their face is the ultimate goal of the Santa Shoebox Project, a charity event that has grown significantly over the past nine years, from humble beginnings of 600 boxes to this year’s goal of 100 000 shoeboxes. The gifts are donated to orphanages, children’s homes and care centres across South Africa, and for the first time this year, Namibia as well.

“The difference between this project and others of its kind is that these gifts are personalised.” Says Chris Oosthuizen, Stor-Age GM Sales & Marketing. “Each gift is intended for a specific recipient, you know their name, gender and age. We had a tremendous time filling our gift boxes and I was astonished at the time and care taken by children and families to personalise their shoebox.” Each of the intended 100 000 shoeboxes is allocated to a specific child, making this project an immense logistical task, that the Santa Shoebox co-ordinators and volunteers tackle with enthusiasm year on year. 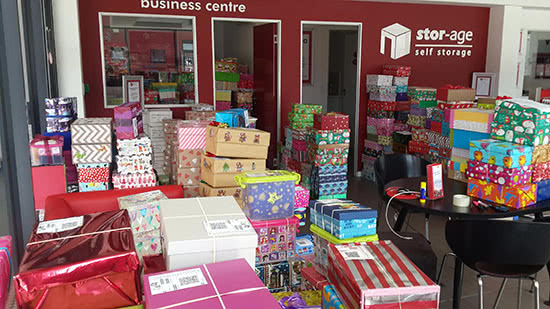 Knowing the difficulties of collecting and delivering shoeboxes all over South Africa and Namibia, Stor-Age was only too pleased to get involved. “We very quickly realised the synergy with our product and the need that Santa Shoebox had for storage space.” Notes Oosthuizen, “…as such we opened our doors nationwide for donors to not only collect a free shoebox, a valuable commodity at this time of year, but also to drop off their completed gifts.” Debbie Zelezniak, Santa Shoebox National Project Manager concurs, “Having a secure space in which to store the equipment necessary to run the campaigns is of course imperative, but it pales in comparison to the invaluable ‘Drop ’n Go’ points provided by stores within the Western Cape and Gauteng. This conveniently allows donors to drop their shoeboxes off prior to the actual Santa Shoebox drop off, resulting in thousands of shoeboxes being delivered by Stor-Age vans, including our flagship event at the CTICC.”

Collecting so many shoeboxes is no easy task and one way to spread the word is through social media. Santa Shoebox relies on corporate sponsors and volunteers for paid marketing initiatives, another area where Stor-Age was able to assist. “The engagement online this year was fantastic. From people asking where they could collect boxes, where they could drop them off, or simply thanking us for the convenient service, we had thousands of interactions across our social media channels.” Says Robbie Cameron, Stor-Age Digital Manager, who also took part at the main drop off for Cape Town, hosted at the CTICC. “Our staff love the Santa Shoebox Project and this year we had number of volunteers assist with carrying and packing boxes across the country. We eventually delivered over 11 000 boxes, up from 8 000 in the previous year, clearly this is a partnership that works.” 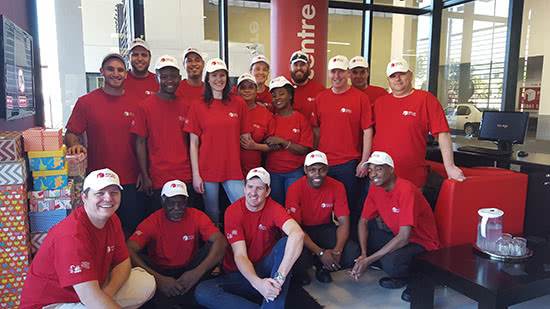 The theme for Santa Shoebox 2015 is ‘Giving for Good.’ In the fourth year of sponsorship Stor-Age has well and truly embraced the culture of giving and provided 8 000 shoeboxes for collection from branches nationwide. The idea was to provide an easy option to build a shoebox with the cost and hassle of acquiring the box removed. One of the biggest challenges at this time of year is finding a shoebox to start your gift. Fortunately one can simply walk into a branch and collect a box. Many donors make their box right in store, saving them a second trip on the drop off date. Others are happy to take their free box home and get the family involved in completing and decorating the gift.

In addition Stor-Age branches served as ‘Drop ’n Go’ collection points. This means that once a shoebox is complete one can simply drop it at any Stor-Age store, safe in the knowledge that it will be transported to the correct processing centre and eventually find its way to a smiling child.  “I really enjoyed taking part in the process, personally donating boxes this year was an uplifting experience.” States Oosthuizen. “The operation is simple, from pledging your box online, the fun had while making it and finally the wonderful drop off day at the CTICC. This is a project every South African family should be supporting.” 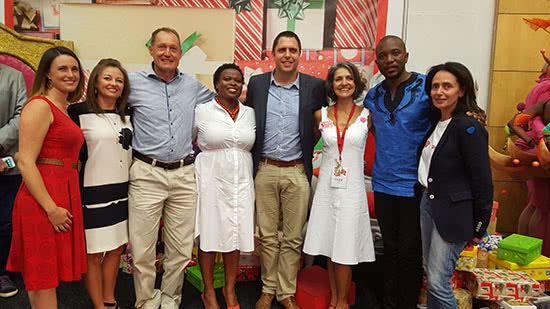 What about the future of the project? “I look forward to seeing Drop ’n Go’s throughout the country in 2016 and to introducing tens of thousands of Santa Shoebox donors to the slick and friendly service offered by the Stor-Age teams nationwide.” Notes Zelezniak. As the only self storage operator in South Africa with a truly national footprint, the hope is to open the project’s impact across all provinces and allow more people to be involved. For more information visit the Santa Shoebox website.
Tags: santa shoebox, charity, stor-age