Cape Town - the greatest city in the world - is buzzing with energy in the countdown to the 2010 Fifa Word Cup Draw tonight. You can quite literally feel the energy in the streets - Long Street with its whole Afro-Euro vibe is going to be a great place to be! It's Africa time! The roof is quite literally going to come off the city tonight! What a great time to be a South African. Not sure if we will ever again have the priveledge of wathcing a FIFA World Cup in SA again in our life times.
On its way home late last night, Stor-Age couldn't but help notice the police and paparazzi presence outside the Western Cape Premier's official residence at Leeuwenhof Estate around 21:00. 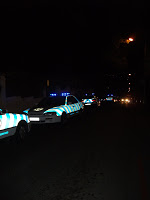 Word from the on-lookers was that Sepp Blatter, David Beckham, Charlize Theron and President Jacob Zuma among others were dining out at the Premiers residence!

And then Cape Town woke up to the 4th of December like this! Shux its tough living in Cape Town! For all those of you out there who aren't in the Mother City tonight - two words - hard luck!