Santa Shoebox 2015 Better Than Ever (Video)

The Santa Shoebox Project has grown steadily from 2006, when attempting to collect 600 gift boxes they managed to collect 2 000. The strength of the idea and support received from the public was immediately evident and this year they aim to deliver over 100 000 shoeboxes to underprivileged children across South Africa and Namibia.

In a first for Santa Shoebox, one major drop-off point was allocated for Cape Town at the CTICC, where an estimated 35 000 shoeboxes were to be donated. The event was spectacular, with live shows including dance routines, opera singing, radio DJ present wrapping contests and even a live story time from some of the stars on e.tv. The proceedings were opened by Western Cape Premier, Helen Zille, after which she toured the facilities and met with a number of volunteers.

Such a large scale initiative requires a number of sponsors in order to ensure it remains a success. PEP, Laser Logistics, Checkers, CTICC and Stor-Age were all individually thanked by Irené Pieters, Santa Shoebox National Coordinator, at the major drop-off event held at the CTICC this year, “…suddenly we had stuff and we had nowhere to put it because we don’t have offices, so along came Stor-Age. So Stor-Age has been fantastic in providing us with storage space for all the things that we need to store throughout the year. They also acted as a pick-up point for empty shoeboxes which become, really, a rare commodity at this time of the year… Then also this year for the first time they acted as drop-and-go in Cape Town for the two days leading up to the drop-off, a very big thank you to Stor-Age.”

The collection of empty shoeboxes across South Africa was a huge success. Many donors discover that a shoebox is extremely hard to come by with over 100 000 shoeboxes pledged. Stor-Age provided 10,000 shoeboxes at stores nationwide for donors to collect and start their gift box. In addition to providing free shoeboxes store locations were made available as drop-off points, where Stor-Age staff would collect and store the valuable parcels before transporting them to the CTICC for the inaugural drop-off event. “We have delivered approximately 8,000 shoeboxes this year and are delighted to be a part of this initiative. The events here at the CTICC clearly indicate how well supported this project is, congratulations to everyone involved in making this possible from the donors to the volunteers and off course the Santa Shoebox co-ordinators, specifically Irene Pieters and Debbie Zelezniak, who have worked tirelessly to make this all possible.”

Santa Shoebox National Project Manager, Debbie Zelezniak, said “Stor-Age off course has been instrumental… we needed a place to store our stuff, which we can’t run the project without.” Throughout the project and for months leading up to the event Santa Shoebox and volunteer co-ordinators from across South Africa visited their self storage units where all the paraphernalia that you would expect for some festive cheer were stored. Stor-Age staff were quickly caught up in the excitement and a number of them volunteered their own time to receive donated shoeboxes at the CTICC over the course of the weekend. On the Saturday of the drop-off event a call was made for some extra muscle to lift the now heavy laden packaging boxes in which the shoeboxes were to be transported. In keeping with the spirit the Cape Town Fire Fighters pledged to work around the clock and assist with the manual labour. 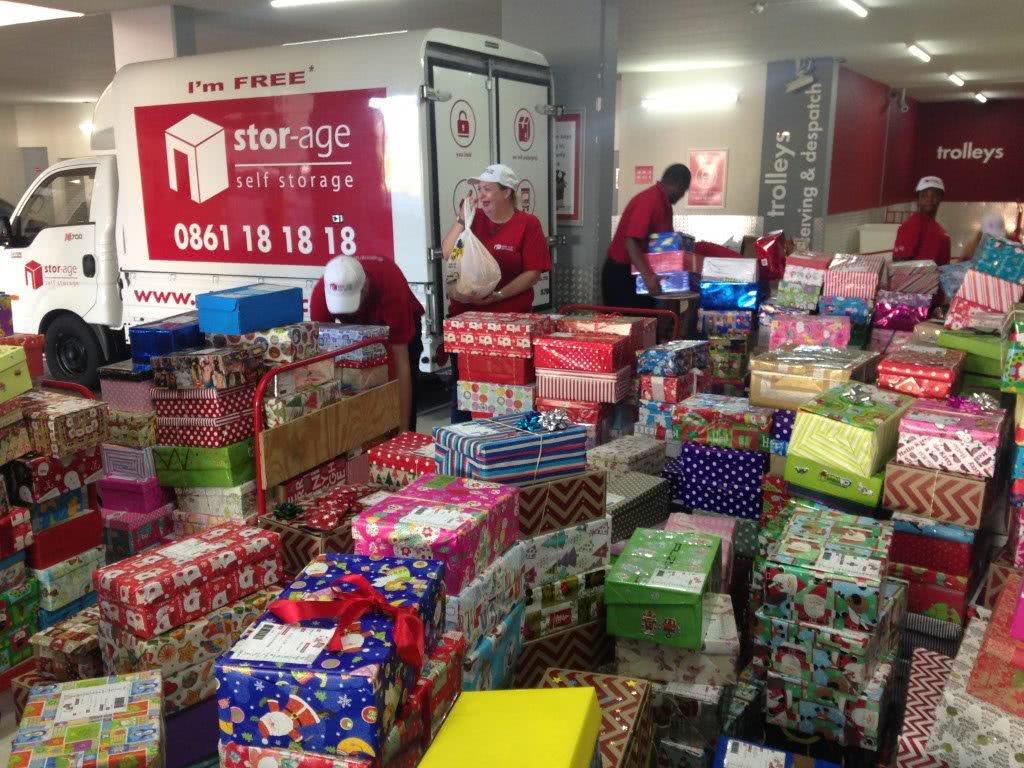 Thankfully the goal of 100 00 shoeboxes has been met and even surpassed, with the Santa Shoebox website noting a 109% pledge rate. Visit their website for more information on how you can be involved www.santashoebox.co.za and make sure you check out more pictures of the Santa Shoebox event.
Tags: santa shoebox, christmas, stor-age