This year the west coast played host to the Stor-Age Conference. Over 140 Stor-Age staff members from all over South Africa gathered for two days of fun and excitement. Each staff member received a conference pack which included several items such as a coloured buff, a pair of bright red Havaianas slops, a bright red poncho, some clothing to wear on the conference and a selection of eats to keep their hunger at bay. The conference formed part of a celebration of Stor-Age’s tenth birthday and thanking staff members for their contribution to the business thus far. The trip was kept a secret from all but a select few and when the busses departed from Cape Town the lucky attendees did not know where they were headed until they arrived at their first stop at the West Coast National Park.


Here they were greeted by the conference organising committee who gave them their instructions and shepherded them towards the beach. After being sorted into their teams and introducing themselves to each other, they undertook their first task. In this task they had to create a sandcastle in the image of Machu Picchu, no mean feat with only your hands and some new friends to assist. After a quick lunch the teams split into a session of reflection and introspection on the beach which allowed them to take stock of their goals and focuses for the upcoming year.

A short bus journey followed to the Geelbek Restaurant where the staff were treated to a truly inspirational and motivating speech from Hein Wagner, who encouraged staff not to let any challenge that stands in front of them stop them from achieving their goals and that their attitude is the most important aspect of any challenge presented to them. Hein proved to be both a highlight and a source of inspiration for many of our staff members. Hein truly challenged each and every staff member with a powerful thought to ponder by saying, “If you change the way you look at things, the things you look at will change.” 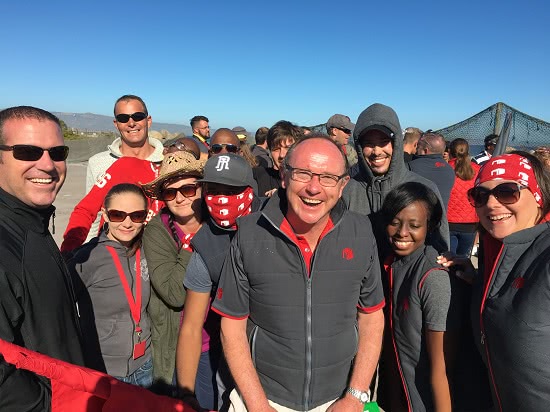 After another short bus journey we arrived at our overnight destination Club Mykonos in Langebaan, where the conference attendees headed to their rooms in order to prepare for the awards dinner that evening. The theme for the evening was ‘formal with a touch of beach’ and staff truly came to the party with a variety of snorkels, sarongs and shorts on display. The evening gave the opportunity to give recognition to staff members who have shown exceptional performance in the last financial year and be rewarded for their contributions. Speaking about the awards, CEO Gavin Lucas was enthusiastic, saying it was a standout aspect of the event and was a great way to acknowledge staff and give recognition. The evening was capped off with live performances from Majozi as well as The Kiffness, who kept the crowd on their feet into the early hours of the morning. When asked about the evening Zipho Mavuya of Stor-Age Head Office had the following to say, “The bands were awesome, I had so much fun, maybe too much fun.”

The following morning saw some tired bodies restored to their sprightly best with a hearty breakfast at Boesmanland Plaaskombuis. From here they ventured to the beach where a series of pirate themed challenges lay in store for them in a scavenger hunt. From putting together puzzles blindfolded, to burying half their bodies in sand, the teams were thoroughly tested in order to receive a clue that would help them find the buried treasure. The pink team eventually emerged victorious and claimed their prize, a buried pirate treasure chest that contained smaller cash-filled treasure chests each. Speaking about the team building activities and conference as a whole, Director Steven Horton said, “What is awesome to see is the teamwork and collaboration that happens, that personal interaction comes out top.”

After an exhausting session on the beach, the teams settled at Die Strandloper Restaurant for a buffet seafood lunch to conclude their time together. In this relaxed seaside setting, it was the perfect way to take stock of a busy few days and bond with both new and old friends alike. Director Stephen Lucas looked back on the event by saying, “The great thing about it is that it’s about the people and bringing everybody together.” And all who attended would most certainly agree.

If this sounds like your idea of fun and you’d like to be a part of the Stor-Age team in the future, head over to the Stor-Age careers page and apply for one of our available positions. Who knows, maybe you could be joining us on the next Stor-Age Conference.
Tags: conference, stor-age, club mykonos, geelbek restaurant, boesmanland plaaskombuis, langebaan, west coast national park