Supporting local sports teams and schools is something that Stor-Age has been proud of since establishment. The first ever Stor-Age to open was in Edgemead, Cape Town and the store has been supporting the local cricket team ever since. This season the boys managed to win their league and will find themselves playing cricket in the 1B League next year.

The Edgemead Cricket Club recently played against Avendale and won by a magnificent 134 runs. Star performers were Stefan Joubert who scored 88 in the first innings and an unbeaten 82 in the second innings. Christiaan Mocke was the pick of the bowlers taking 5 wickets for 32 runs. A big congratulations to all the players that performed so well this year. 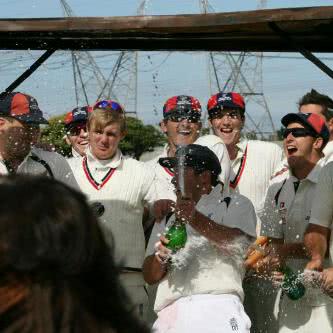 Stor-Age has been involved with supporting sports in communities for a number of years and continues to provide sport sponsorships to many teams and schools in the local communities that we operate. If you are looking to be included in our efforts to promote healthy living through participating in sports in South Africa please drop us an email at info@stor-age.co.za. Remember if you are looking to store any extra sports equipment, especially out of season, then a self storage unit can be the perfect answer.
Tags: sport sponsor, sponsorship, cricket, edgemead